Recently we had a spaghetti dinner fundraiser for our boy scout troop.  It included a cake auction and the boys were asked to donate a cake they had made.  Some of the boys made desserts, but clearly some of the parents helped out as well.

Pretty sure this guy’s mom helped him out juuuuuust a little, the frosting job is pretty good for a 12-year-old.

This is a cinnamon roll cake my oldest boy made.  He found it on Pinterest.  Here is the link to the original recipe. 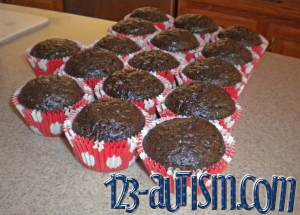 I decided to help my second-oldest boy out by making a back-up batch of cupcakes to donate.  My friend who was in charge told me themed items seemed to raise the most money last year, so I decided to try a variation on a fun idea I’d seen on YouTube.  I found red and white polka-dot cupcake liners, and baked dark chocolate cupcakes in them.

While they cooled, I covered a cut and taped cereal box in aluminum foil.  (Don’t you love my beat-up table?  Someday I’m going to refinish it.)

Next, I used double-sided tape to wrap a red polka-dot grosgrain  ribbon around the box

Then I used my Mickey Mouse punch to punch Mickey heads out of black card stock.  I affixed those to the box using the double-sided tape.  (You can really see the glory of the table in this shot.)

I frosted the cupcakes with a dark chocolate and pushed mini-Oreos in for the ears.  I used plenty of frosting, so I didn’t need any toothpicks.  I left some of them like that, but I also sprinkled crushed Oreos on top as well.

The finished product. I’m pleased to say they raised $50 for the troop.  We had just enough left over for each family member to get one and they were a hit!

How Do I Keep it Together?

I'm often asked how I do what I do with so many kids on the autism spectrum. I've thought long and hard about this. I've found good resources and friends who support me, but most importantly, I've found strength through my faith. You can learn more at https://www.mormon.org/